Germany’s centre-left Social Democrats (SPD) have claimed victory in the federal election, telling the party of outgoing Chancellor Angela Merkel it should no longer be in power.

SPD leader Olaf Scholz said he had a clear mandate to form a government, while his conservative rival Armin Laschet remains determined to fight on.

The two parties have governed together for years.

But Mr Scholz says it is time for a new coalition with the Greens and liberals.

Preliminary results gave his party a narrow election win over the conservatives who suffered their worst-ever performance.

The Greens and pro-business FDP attracted the most support from the under-30s, in an election dominated by climate change and by differing proposals on how to tackle it. The Greens made history with almost 15% of the vote, even though it was well short of their ambitions.

It was the tightest race in years, bringing an end to the post-war domination of the two big parties – Mr Scholz’s SPD and his rival’s conservative Christian Democratic Union (CDU).

Merkel stays in place for now

Exit polls predicted a dead heat, but this election was unpredictable from the start, and the result was never going to be the end of the story. For one thing, the outgoing chancellor is going nowhere until the coalition is formed – and that may have to wait until Christmas.

The main parties want a new government in place by the time Germany takes over the leadership of the G7 group of nations in January.

The next chancellor’s task is to lead Europe’s foremost economy over the next four years, with climate change at the top of voters’ agenda.

Mr Scholz’s SPD supporters greeted him in raptures, but it was only later when his party edged into the lead that he told a televised audience the voters had given him the job of forming a “good, pragmatic government for Germany”.

Speaking on Monday he said there were three parties that were on the up – his party, the Greens and the liberals – and it was time for the conservatives to back down. “The clear mandate the citizens of this country have given – these three should form the next government.”https://emp.bbc.co.uk/emp/SMPj/2.43.9/iframe.htmlmedia captionSwipe left or right? Germany’s election dating game, explained

His conservative rival has dug in, arguing it was about forging a coalition, not about getting “an arithmetic majority”. Winner doesn’t take all, in other words.

CDU General Secretary Paul Ziemiak did not gloss over the defeat early on Monday but said that was not the point: “In the end the question is going to be can you create a genuine project for the future?”

“Two maybe-chancellors and two kingmakers” – was one of the headlines summing up Sunday night’s rather scrappy result, but that is what it looked like.

Because it’s not just the Social Democrat and conservative leaders fighting for power. The two kingmakers are open to offers and planning to talk to each other to explore common ground.

Together the liberals and the Greens make up over quarter of the vote and would carry both of the big parties over the line.

They may be more popular with younger voters than any other parties, but it would take some skill to bring them under the same roof. A Greens spokesman on Monday said it was no big secret that they were not close to the liberals. 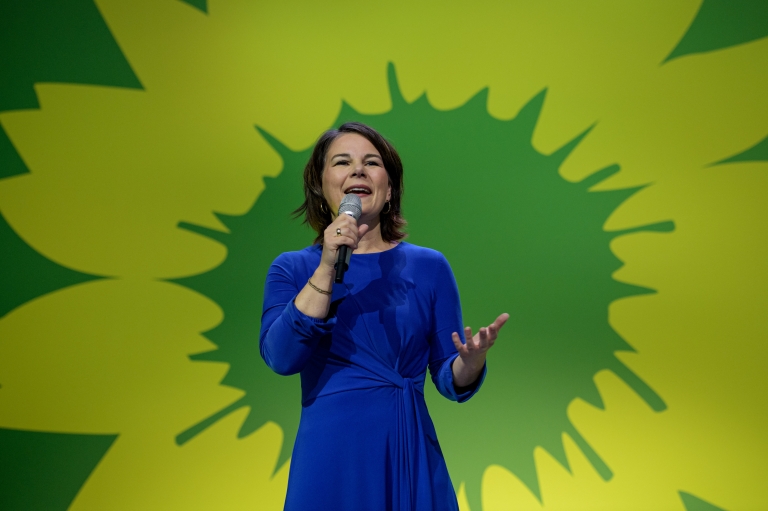 We wanted more. We didn’t manage that, partly because of mistakes at the start of the campaign – mistakes I made

So of all the possible coalitions, the Greens and the liberals feature in the two that are most likely to form.

It is the first time that Germany is facing a three-way coalition, but this country has entered a new political era and the talking is yet to begin.

Left-wing Die Linke fell below the 5% threshold required to get into parliament but survived because it secured three direct mandates.

And although the far-right AfD’s share of the vote appears to have slipped nationally, it’s set be the largest party in the eastern states of Saxony and Thuringia.

HitzAfrik
11 hours Ago
Following the disappointment of a group-stage exit at the CAF Africa Cup of Nations earlier this year, Milovan Rajevac was...

HitzAfrik
3 days Ago
The first woman to head the high profile Intelligence Department of the Ghana Police Service, Deputy Commissioner of Police (DCOP)...

HitzAfrik
6 days Ago
Following the state funeral service, the queen's coffin is on its final journey to Windsor Castle. A private service will...

HitzAfrik
6 days Ago
Queen Elizabeth II is to be reunited with her husband the duke of Edinburgh as she is laid to rest...

HitzAfrik
1 week Ago
It will be a crime for Aisha Huang to release video footages of her sexual encounters with Ghanaian officials. That’s...

HitzAfrik
1 week Ago
Aisha the galamsey queen Attorney-General and Minister of Justice has filed new charges against ‘galamsey’ queen, Aisha Huang in respect...

Ghana vs Brazil: Addo Gets It Wrong – What Did We Learn?

Ed Sheeran: I Owe My Career To Jamal Edwards

The dollar is super duper mighty right now. Here’s what that means for you

Inflation Is Stubbornly High. Here’s What This Bank Exec Suggests For You

Britain’s Queen Elizabeth II is to be reunited with her husband the duke of Edinburgh as she is laid to rest in a historic state funeral.

Uganda Airlines to Name 200 People Who Travelled For Free

The Queen’s Coffin To Be Flown To London From Scotland

“Trust me to officially have an EGO.” said Adele on receiving her latest prize.

Mr Trump, 76, Spent The First Part Of His Speech Criticising the FBI

President Akufo-Addo jumped to the Defence of Finance Minister, Ken Ofori Atta against Public calls for him to either resign or be fired

Lucky Winners From All Over Africa get to join the Dubai Girls to explore the never-ending Splendour of Dubai.