“As you get older, you look back and think: how the hell did I pull that off?”

It was perhaps the most surprising move of all time, for one of the world’s greatest players.

He was a football icon and still only 28. They were bottom of the Southern League Division One North.

Barry Fry was the man who took him to Dunstable Town – a side who were getting crowds of 34 and 43.

On the day Best would have turned 75, this is the story of how a sporting legend left Old Trafford for Creasey Park, told by the man who made it happen.

“He was a genius on the field. A skinny kid, but he rode tackles like no-one else; a wizard at dribbling, with the heart of a lion. He was the best player I’ve ever seen.”

Fry is reflecting on his friendship with Best. They were teenage team-mates at Manchester United’s youth academy. One became a playing great, the other one of the game’s most colourful managers.

Just as Fry had been mentored by Johnny Giles and Nobby Stiles as a youngster at Old Trafford, manager Sir Matt Busby wanted him to help Best settle in after he arrived from Belfast in 1961.

“I was asked to watch out for this young lad but he only lasted two or three days before he ran back home to his parents. He used to go all red, he was a very shy boy,” remembers Fry.

Fry used to buy the two complimentary tickets Best received for each match. It gave his pal some cash and his own girlfriend’s father the chance to see his favourite team. Fry thought nothing of it, but for Best it was very different – as Fry would later find out.

While Fry struggled with blood clots and called an early halt to his playing career, Best was changing the game after being fast-tracked from the A team to the first team.

Football had seen nothing like it. Pace, poise, balance, control and resilience – he danced around opponents in the glory, glory days for Manchester United.

Best thrived alongside team-mates Bobby Charlton and Denis Law as United won the First Division title twice before landing the coveted European Cup in 1968 – 10 years after the club had been devastated by the Munich air disaster.

He was named European Footballer of the Year, the press called him the fifth Beatle, but his career did not quite reach the same peaks again, albeit illuminated by beautiful cameos such as his six goals in one FA Cup tie against Northampton Town.

Distractions off the field dominated, and an increasing reliance on alcohol changed him forever.

By 1974, he had fallen out with United boss Tommy Docherty and played his last game for the club after 178 goals in 466 matches.

“He didn’t like Tommy Docherty, he hit the self-destruct button and ran away from it all. What a shame that he packed up at 28,” says Fry.

Best retreated to his Manchester nightclub and it was in the Bootle Street venue called Slack Alice that Fry put a bold offer to his old pal.

“I got the job as Dunstable manager. My first crowd was 34, and the next was 43 because I made all my family come from Bedford,” laughs Fry, now aged 76 and director of football at Peterborough United.

“Attendances were so small, rather than announcing the team changes to the crowd, we’d announce the crowd changes to the team. We were about to finish at the bottom for the ninth year running, and I needed a gimmick.”

That Sunday night in Slack Alice, Best agreed to turn out in two pre-season matches. The only issue was Docherty, who held the player’s registration. Fry went to see him.

“Dunstable Town! What makes you think Bestie will play for ‘Dunstabubble’ when I can’t get him to play for Man United?” boomed Docherty in his office at the The Cliff, where United trained.

The Scot was eventually persuaded and even agreed to send a United reserve team down as opposition, reportedly with the help of a sweetener from building magnate and Dunstable Town owner Keith Cheeseman.

Cheeseman had already helped to recruit ex-England striker Jeff Astle. There was much more to the new chairman than the odd shady business deal – as we will see later.

“It’s not very often that such a renowned footballer plays for your local team,” observes Colin Tibbett, 80.

“He had the touches, he was a really good ball player. He may have lost a bit of pace, but it was still Bestie,” says Tibbett.

Temporary stands, a shed that doubled as a tea bar and hundreds crammed onto a mound overlooking the ground. Souvenir programmes were 5p. Being there was priceless.

“It was electric,” remembers Fry.

“As a schoolboy, I played at Wembley in front of 90,000 people in an England v Scotland game and that was deafening.

“Believe you me, that night at Creasey Park, the reception Bestie got was out of this world.” 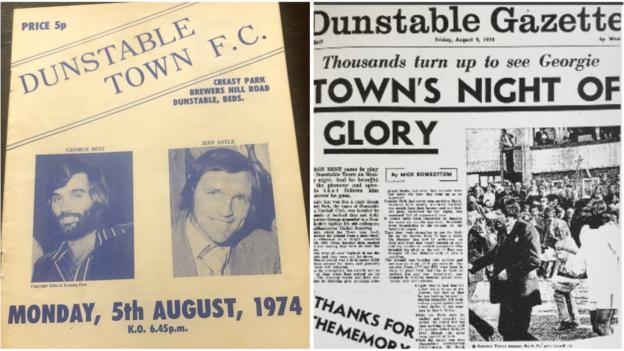 The United team included George Graham, who went on to manage Arsenal and Spurs. Dunstable ran out 3-2 winners and the match featured on the BBC News.

“Dunstable did brilliantly out of it. The place was packed to the rafters,” Best wrote in his autobiography Blessed. “The crowd ran on to the pitch at the end and I was mobbed.”

Fry said the players could barely believe who was in the dressing room alongside them.

“They wanted autographs, photographs. Bestie was just one of the lads with no airs and graces. I think we left Creasey Park at about 2am – they just enjoyed his company,” he says.

“We’d had a full house inside and 5,000 outside. Dunstable had arrived.”

A week later, Best was back at the sixth-tier club – this time facing Irish side Cork Celtic, managed by former Chelsea striker Bobby Tambling, after an eventful journey down south.

“His car broke down and he was at Knutsford services,” says Fry.

“When I told everyone, they assumed he wouldn’t turn up, but he got a taxi from there to Dunstable and arrived 20 minutes before the game.”

Best had reportedly been paid £200 a week. He donated £25 so Dunstable could afford new nets for the goals.

The increased profile and ticket sales helped attract new players to the club. It heralded the start of a season where they were promoted after scoring 105 goals, including 34 for Astle.

“Bestie didn’t do it for money. He had a nightclub and a boutique which were lucrative businesses at the time. He just did it as a favour,” says Fry.

“Nobody had heard of Dunstable, but because of the publicity, I was able to bring in players and it was a dream come true when we got promotion.

“Financially, we were making half a crown a week but in our promotion year we had 18 crowds of more than 1,000.”

Dunstable was the first in a series of fleeting appearances Best made at clubs in the late 1970s and early 1980s – from Stockport County to Hong Kong Rangers, via Hibernian, Fulham and spells in the United States with the North American Soccer League.

It all helped fund a champagne lifestyle which spawned his famous quote about spending money on booze, women and fast cars: “The rest I just squandered.”

His affairs became increasingly chaotic as alcoholism took hold. He eventually needed a liver transplant and died aged 59 in 2005.

“It was such a shame. He tried everything to stop him being an alcoholic, but it got the better of him,” says Fry, who went on to manage Barnet, Maidstone, Southend United, Birmingham City and Peterborough United.

“He was a different man when he was drunk and became aggressive. It just wasn’t him.

“As a person, one to one, he was a lovely, intelligent man with a dry sense of humour.”

While Best’s fortunes suffered, so did Dunstable’s. Cheeseman had been a shady benefactor, with Astle suggesting in his biography that he gave Docherty £1,000 to ensure Dunstable faced United.

“About a year later, the chairman Keith got put inside for embezzlement -six years for embezzling nearly £300,000 – so the players weren’t getting paid,” says Fry.

Best turned out for a third, and final time, against neighbours Luton Town in a match which raised money for the players.

Cheeseman’s dodgy dealings would leave Dunstable Town in liquidation. He later admitted involvement in a 1990 conspiracy to sell nearly £300m of bonds stolen at knifepoint in the world’s biggest mugging.

Meanwhile, Best went on to guest at Astle’s West Brom testimonial, repeated the trick for Fry when he managed Barnet and Maidstone, and was twice a guest speaker at Peterborough.

“He turned up for everything, which was a miracle in itself,” says Fry, who was invited when Best was the subject of the This Is Your Life programme.

“I said to him: ‘I can’t believe you came to play for me at Dunstable.’

“He said: ‘Baz, I’ll never forget you, mate. I used to send my wages to my mum and dad. You helped me out with the money you gave me for the complimentary tickets.’

“Honestly, I had a lump in my throat. To be so loyal, to me – small fry – when he reached the top of the game.

“It’s mind-blowing. He said to take it as a compliment – you helped me a lot, and didn’t even know.”

Creasey Park is now owned by the local council and used by both Dunstable Town and the separate AFC Dunstable team.

“The snack bar sells ‘Bestie Burgers’ and ‘Barry’s Fries’; in honour of George and Barry. I’m not sure how many people make the connection,” says Dunstable Town chairman Andrew Madaras.

The club tried to cash in on Best’s famous appearance for them in an all-white kit by adopting the same style before realising it cost too much to wash.

Efforts are being made for Dunstable Town, once home to England internationals Tony Currie and Kerry Dixon, to become a community benefit society – a not-for-profit organisation with mutual benefits for the local area.

It will be a new chapter in the story of a club which looks back fondly on its brief spell as George Best’s home.

“There was an awful lot of people up there, a real buzz – even euphoria – around the place. I think it gave the players one hell of a boost,” remembers Tibbett of watching the game against Manchester United.

Madaras adds: “There are a still couple of pictures from that night behind the bar at Creasey Park, which visiting clubs remark on.” 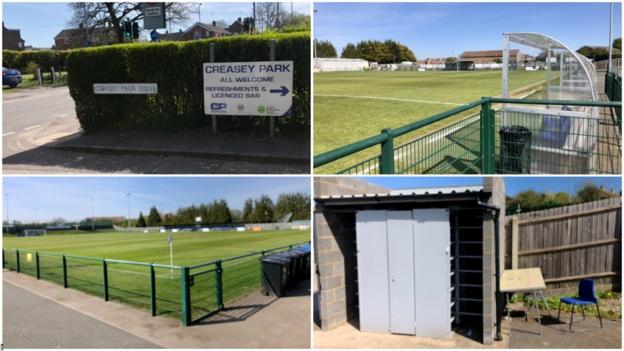 Fry has been typically ebullient but pauses when I tell him that Best’s 75th birthday is approaching – briefly lost for words, before continuing.

“George was a great entertainer. I don’t think he realised how much pleasure he gave to other people who watched him perform,” he says.

“He helped a lot of ex-players and was absolutely fabulous to me.

“I’ve been in the game for 60 years, and dreamed of being a manager. None of it would have come true if it wasn’t for Bestie.”