CNN)Cádiz defender Juan Cala has vehemently denied racially abusing Valencia’s Mouctar Diakhaby during Sunday’s La Liga encounter, saying that he has been involved in “a public lynching. “Sunday’s game was suspended for 20 minutes after Valencia walked off the pitch in solidarity when Diakhaby said he was subjected to racist abuse from Cala, according to the referee’s report. The report states that Diakhaby told the referee Cala had called him a “sh*tty black,” but that the alleged incident “was not perceived by any member of the refereeing team. “In a video of the match, Diakhaby appears to be angry following their exchange and followed Cala across the pitch, where he was eventually restrained by some of his teammates and opposition players. As Diakhaby was led away, Cala could be seen covering his mouth with his hand as he spoke to his coach on the touchline. 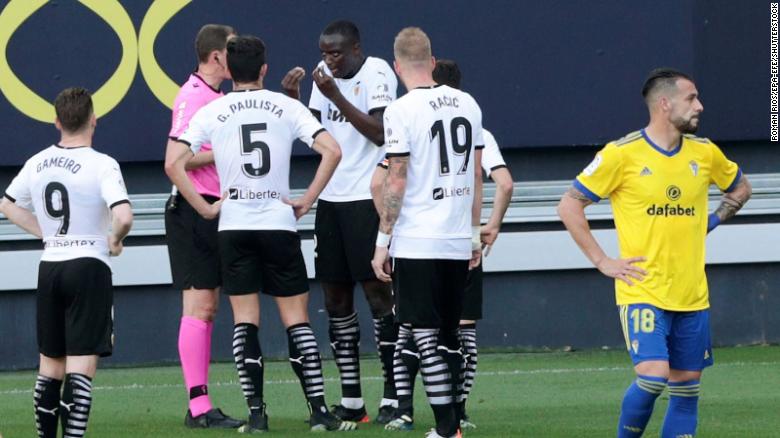 Valencia’s defender Diakhaby (middle) talks with the referee after allegedly receiving a racist comment by Cadiz’s defender Juan Cala (unseen).Following a conversation with his teammate Gabriel Paulista and the match referee, Diakhaby led the rest of his Valencia teammates off the pitch and down the tunnel. Valencia eventually returned to the pitch to continue the match, but in a statement after the game said it only did so under “threat” of being punished. Speaking at a virtual news conference on Tuesday, Cala said: “What has happened is a media circus, a public lynching.” “The best thing would have been to get me and (Diakhaby) together in a room to explain what happened. Instead, everything that has happened has been a circus. I was judged before the game was over.” There are 20 or 25 cameras around, who knows how many microphones […] When he (Diakhaby) was allegedly insulted there were approximately 7 or 8 players around me and nobody heard anything. So, at the very least, let me have some doubt about what happened,” he said. No other players from either side have come forward since Sunday’s incident to disclose whether they heard, first hand, what was said. Following Cala’s news conference, Valencia issued a strongly worded statement headlined: “Juan Cala, We Don’t Believe You.” The statement in part reads: “Valencia CF are deeply saddened by statements made by Cádiz CF player Juan Cala this Tuesday, in which 48 hours later, he denied racially insulting Mouctar Diakhaby during the LaLiga match played last Sunday at the Ramón de Carranza. “Cala has missed a great opportunity to accept his mistake and apologise to the player affected. 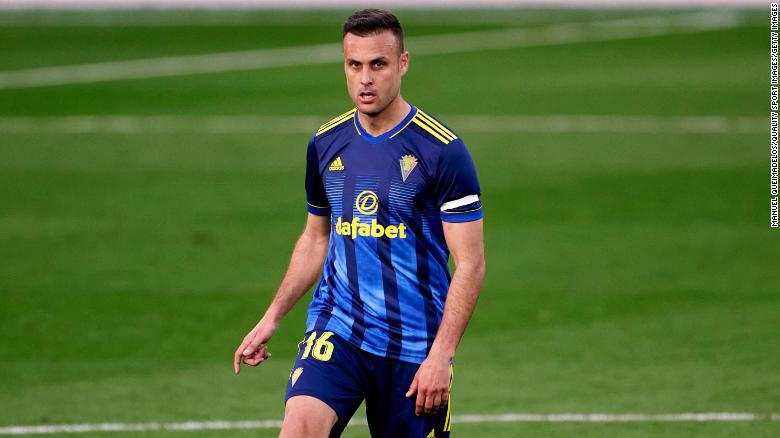 Cala in action during the La Liga Santander match between Villarreal CF and Cadiz CF. “Instead of doing this, he attacked both Diakhaby and other members of Valencia CF. “Valencia ended the statement by reiterating their support for Diakhaby adding “we believe our player and back him completely.” Neither Cádiz nor Cala are yet to publicly responded to Valencia’s statement. Diakhaby himself spoke for the first time about the incident in a video posted on his official Twitter account earlier on Tuesday and prior to Cala’s press conference. The French defender said he had been “very hurt” and hoped La Liga would issue sanctions.

Speaking to Spanish TV show El Chiringuito on Monday, La Liga president Javier Tebas said: “We are analyzing the images to find out what happened. Something happened because the Valencia player felt very angry. “The Royal Spanish Football Federation (RFEF) was not immediately available for comment when contacted by CNN.