(CNN) When your career highs come around only once every four years, the prospect of putting your aspirations on hold can be difficult to stomach. It’s a reality that all athletes hopeful of competing at the Olympics were faced with last year when, for the first time ever, the Games were postponed. “It was hard to absorb, and it still is. It’s felt like we’ve been sitting in a purgatory for a whole year now,” says Sandi Morris, a US pole vault silver medallist from the 2016 Rio Olympics. Almost 12 months on from the postponement of Tokyo 2020, a new goal is now in sight. With restrictions and safety measures still being put in place, the Olympics are set to begin on July 23 this year.

“I’m starting to feel a sense of normalcy, and I’m actually training for something instead of just training and training with no competition or destination in sight,” adds Morris, speaking on CNN’s Coronavirus: Fact vs Fiction podcast. “It’s definitely different now that we have hope; last March felt pretty hopeless. “A year can be a significant period of time in an athlete’s career. For Morris, it offered a chance to recover from niggling shin injuries and to sharpen her technique. But for her husband Tyrone Smith, a three-time Olympic long jumper close to calling time on his athletic career, the postponement led to a period of introspection. “I probably experienced some mild depression once that announcement came because I had been building everything towards this last hurrah, making those sacrifices in a time in my life where the sacrifices were harder,” says Smith, who is also an MBA student at the University of Texas at Austin. “It was disheartening, gutting, all those words, and it took some soul-searching for me to decide: am I able to continue to do this for another year?” 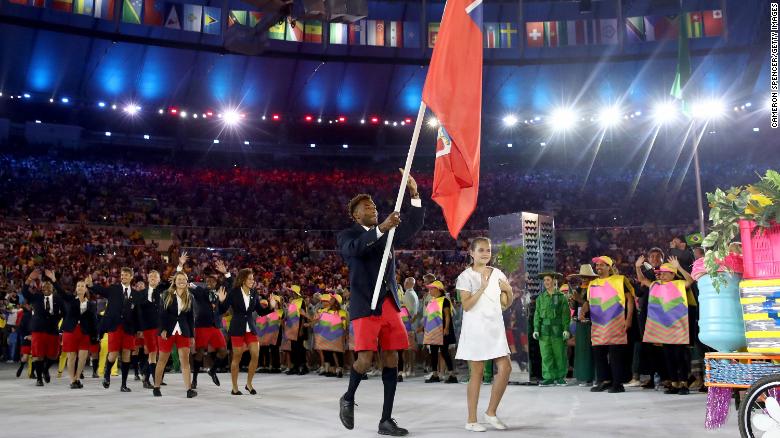 Tyrone Smith carries the flag for Bermuda during the opening ceremony of the Rio 2016 Olympics.

Ultimately, Smith, who competes for Bermuda but lives in the United States, decided to train for another year. However, figuring out how to train amid a global pandemic was a challenge in itself. “I ended up coming back to Texas because I train on a high school track — there’s absolutely no way to lock it, it’s open from three different sides,” says Smith. “I kind of broke the rules. They put up some signs during Covid: no using the track. But I said the police are going to have to come and tell me to leave because I have to get this training in. “Unable to train at her usual facility at the University of Arkansas, Morris found a unique solution. After moving back in with her parents in South Carolina, she and her dad decided to build their own pole vault pit. “I called dad, and it was a moment of desperation,” she says. “We’ve talked about wanting a pole vault pit in their neighborhood in South Carolina for a number of years because I would love to be able to fly home and visit my family and actually be able to stay for a little bit and be able to train … that’s kind of where the idea came from. 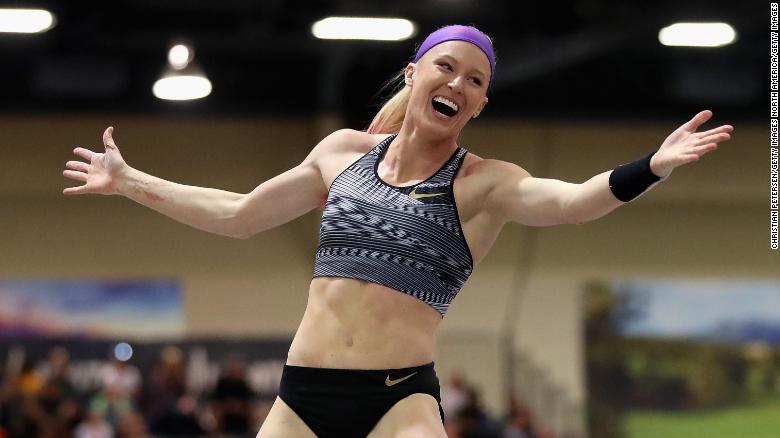 Sandi Morris reacts during a competition in Albuquerque, New Mexico, earlier this year. The new pole vault pit meant Morris not only had a place to train, but also compete. Two events were hosted there last summer, and they plan to hold more in the future. “My dad, he’s a perfectionist,” says Morris. “I could break a world record on the runway that we built, and it would count because it is certified, it is perfectly flat, it is everything … I know that I have improved, and I made it through the summer just because of my dad.”

As far as this year is concerned, both Smith and Morris hope to find track meets in the coming months as they prepare for the Olympics. Unable to travel to Europe for competitions, they’re still unclear exactly what form their pre-Olympic training might take. Smith, 36, is getting ready to compete in one last Games, after which he will retire from athletics. His intentions for this season are scaled-down and straightforward.” I have very specific goals: qualify for the Games, get to the qualifying round, have another great jump there, get to the final, have another great jump. I’m really only looking for three or four great jumps this season,” he says. “I’m kind of working towards having some haymakers. It should be fun, a slightly different kind of training.”

Tokyo Olympics: Steeplechaser Colleen Quigley on mental health, modelling and the Olympic dream 02:55Morris, 28, hopes to go one step further than the silver medal she won in Rio, and indeed the silver she won at the 2019 world championships in Doha, Qatar — her most recent major championship event and an experience she hopes to draw on in Tokyo. There were low levels of attendance in Doha, as is likely going to be the case in Tokyo given coronavirus restrictions. It is still unclear whether fans will be able to attend this year’s Olympics with organizers saying last month that a decision on the number of spectators permitted will be made by spring. “I could see them doing things like having fake fans in the stands and having the audio will help a lot … but it’ll definitely be different,” says Morris.” At the same time, whether there are fans or not, it’s still the Olympics to us. I feel I will still be just as motivated to medal and to win that day as I would if there were fans in the stands. “It probably won’t feel as exciting, but I’m going to have the same amount of motivation in my heart.”

Playbooks have been produced for those traveling to Tokyo which outline some of the safety measures being put in place. According to the International Olympic Committee, this means a “toolbox of Covid-19 countermeasures” that includes “immigration procedures, quarantine measures, testing, personal protective equipment, contact tracing and vaccinations.”

Tokyo 2020 torch relay to begin March 25 with infection measures in place 01:16Athletes have been encouraged, but not required, to get vaccinated before competing, while spectators for the torch relay, which starts later this month, have been told to clap, but not cheer, in order to reduce the risk of transmission. Despite these added layers of complexity, Morris and Smith are determined to drink in every moment of Tokyo 2020 — their first Olympics as a married couple. “Our story is very embedded in the Olympics, and Rio is really where we got to know each other, spend time together, and I would go as far as to say we fell in love,” says Morris. “It really would be a fairy tale story to get a second Olympics together, (this time) as a married couple. It has been really painful to watch Tyrone not achieve what he wants to. It breaks my heart. “If I could give away my medal and that meant he was going to medal or he was going to achieve his dreams, I would totally do that.” 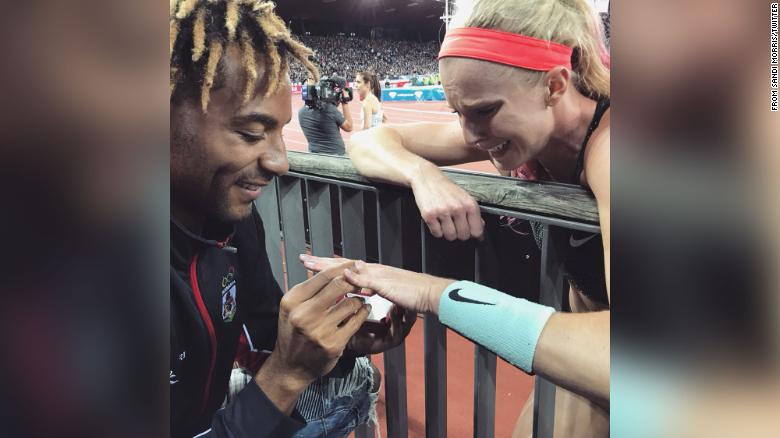 The couple got engaged at a meet in Zurich, Switzerland, in 2018.That sentiment works both ways: “If me not getting a medal or making it to the final guaranteed Sandi an Olympic gold or world record or whatever, I would make that sacrifice all day long,” says Smith. Unable to control his wife’s performance, Smith will instead settle for being satisfied with his own. “I really just hope that when I’m finished in Tokyo, I have this sense of pride — that I can walk off the track from my last meet happy, content and proud of what I’ve done.”

Volcano erupts for a second time on Caribbean island of St. Vincent

Prince Philip: What are the plans for his funeral?

Volcano erupts for a second time on Caribbean island of St. Vincent

Prince Philip: What are the plans for his funeral?