On the first day of her new teaching job at a Chinese government-run detention centre in Xinjiang, Qelbinur Sidik said she saw two soldiers carry a young Uyghur woman out of the building on a stretcher.” There was no spark of life in her face. Her cheeks were drained of colour, she was not breathing,” said Sidik, a former elementary school teacher who says she was forced to spend several months teaching at two detention centres in Xinjiang in 2017.A policewoman who worked at the camp later told her the woman had died from heavy bleeding, though she didn’t say what caused it. It was the first of many stories the policewoman would tell Sidik during the teacher’s three-month assignment at the heavily-fortified building that housed female detainees. According to Sidik, the policewoman claimed to have been assigned to investigate reports of rape at the centre by her superiors, though CNN has no evidence of that claim. However, Sidik said what she heard and saw herself was so disturbing that it made her ill. Sidik’s allegations are similar to those of former detainees who have spoken of rape and systematic sexual assault within China’s vast detention network. Her testimony is a rare account of a worker’s direct experience of life inside the detention centres, where the US government alleges China is committing genocide against Uyghurs and other Muslim minorities through a repressive campaign of mass detention, torture, forced birth control and abortions. The Chinese government has rejected allegations of genocide, and in a statement to CNN said “there is no so-called ‘systematic sexual assault and abuse against women’ in Xinjiang. “However, Sidik said the female police officer described how her male colleagues used to boast about it. “When (male guards) were drinking at night, the policemen would tell each other how they raped and tortured girls,” Sidik told CNN from her new home in the Netherlands. 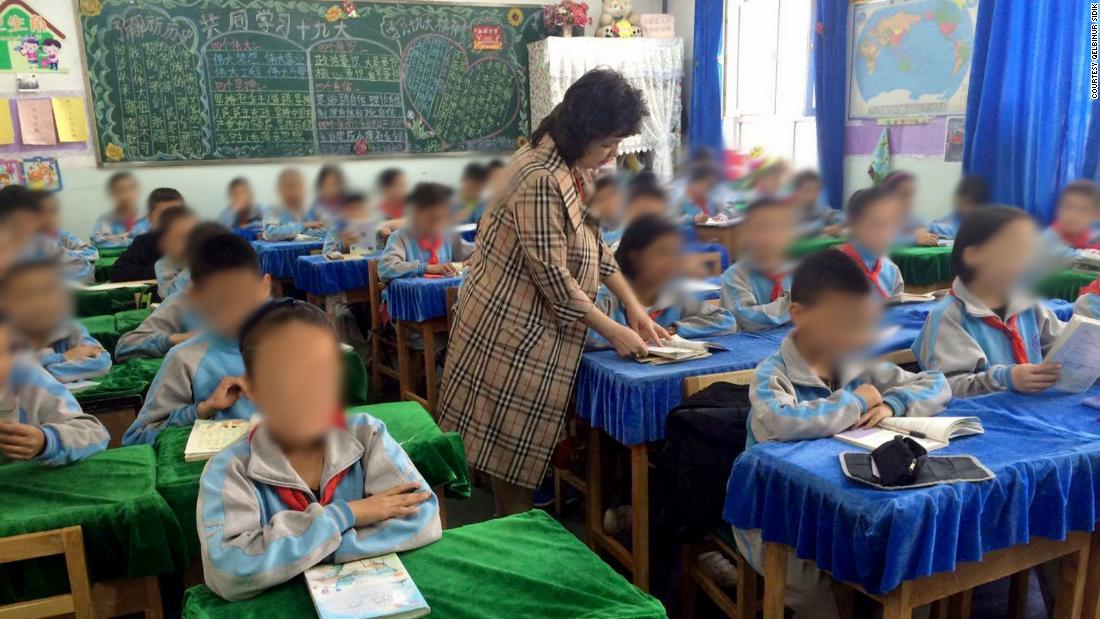 Qelbinur Sidik went from being an elementary school teacher to someone forced to teach Mandarin to detainees.

An ethnic Uzbek, Sidik grew up in Xinjiang and spent 28 years teaching elementary school students aged from six to 13. In September 2016, she said she was summoned to a meeting at the Saybagh District Bureau of Education and told she’d be working with “illiterates.” In March 2017, she met her new students — about 100 men and a handful of women. “They came in, their feet and hands chained in shackles,” she said. At her first lesson, Sidik said she turned to the chalkboard only to hear the detainees behind her crying. “I turned slightly, I saw their tears falling down their beards, the female detainees were crying loudly,” she said. Young detainees who arrived at the centres “fit, robust and bright-eyed” quickly sickened and weakened, she said. From her classroom in the basement of one camp, Sidik said she could hear screams. When she asked about their cries, she claims a male policeman told her that detainees were being tortured.” During the time I was teaching in there, I witnessed horrific tragedy,” Sidik said. CNN has no way of verifying Sidik’s account from inside the detention centres. However, former Xinjiang detainees have told CNN they were subjected to political indoctrination and abuse, and Uyghurs who now live abroad have described relatives disappearing into detention. Leaked documents provided to CNN showed Uyghurs could be sent to the camps for as little as having a beard or wearing a veil. The Chinese government has claimed the camps are “vocational training centres,” part of an official strategy to both stamp out violent Islamist extremism and create jobs.” There is no ’rounding up thousands of Uyghur Muslims’,” said Xu Guixiang, a spokesperson for the Communist Party publicity department in Xinjiang, at a government press conference on February 1.”What we have cracked down on, according to the law, are a few heinous and obstinate leaders and backbones of extremist groups. What we have rescued are those who have been infected with religious extremism and committed minor crimes.”

‘Then I was gang raped’

Tursunay Ziyawudun said she had committed no crime when she was first detained in April 2017, after returning home to Xinjiang’s Xinyuan County to obtain official documents. She and her husband had been living for five years in neighbouring Kazakhstan. Her husband, Halmirza Halik, an ethnic Kazakh, was not detained and tracked her down to the Xinyuan County Vocational School. “We spoke through the iron gate of the school,” said Halik, speaking by phone with CNN from Kazakhstan. “She cried after seeing me. I told her don’t be afraid … you have not broken the law and there is nothing to worry about. “ 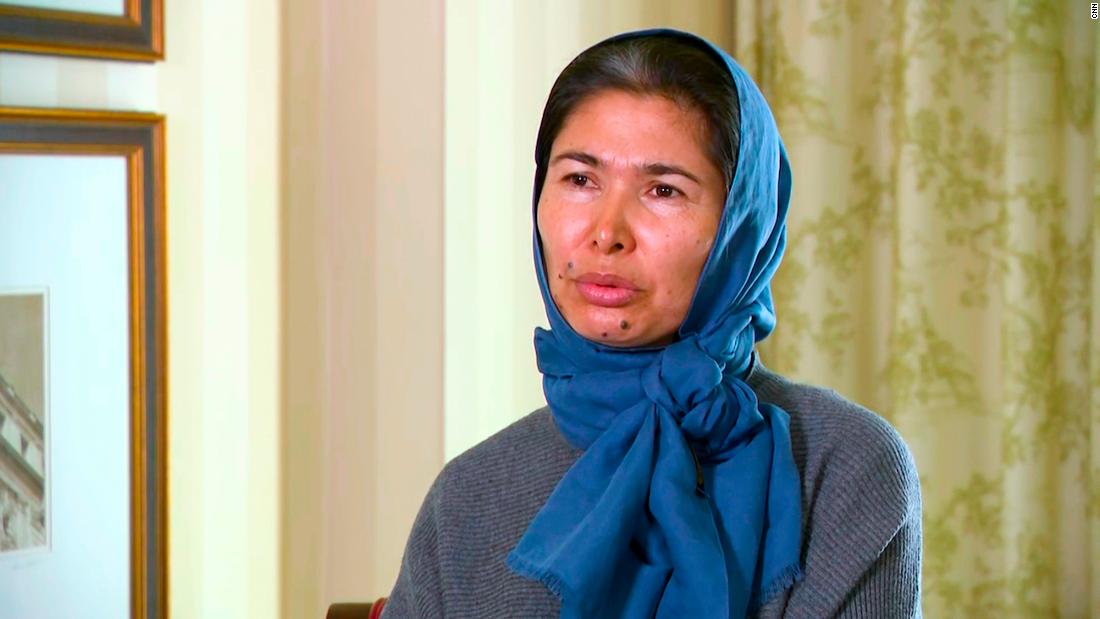 They were extremely sadistic, causing pain and damage to the body by beating and smacking my head on the wall.

Ten days later, she says a group of male guards took her away from her cell. “In the next room I heard another girl crying and screaming. I saw about 5 or 6 men going into that room. I thought they were torturing her. But then I was gang raped. After that I realized what they also did to her,” Ziyawudun said, through tears. She said it happened multiple times while she was detained in the camps.” They were extremely sadistic, causing pain and damage to the body by beating and smacking my head on the wall … it was their way of punishing us.”Ziyawudun’s allegations of rape and torture were first reported by the BBC. CNN is unable to independently verify Ziyawudun’s claims, but they are similar to accounts from Gulbakhar Jalilova, an ethnic Uyghur from Kazakhstan. Speaking to CNN in July 2020, Jalilova, described being locked in a “prison-like” room with about 20 other women after she was detained in May 2017.Jalilova said she confronted one guard who sexually assaulted her. “I told him, ‘Aren’t you ashamed? Don’t you have a mother, a sister, how can you do this to me like that?’ He hit me with the electroshock prod and said, ‘You don’t look like a human’,” she said. On the night of September 26, 2019, after being warned by Chinese authorities not to speak of her experiences in detention, Ziyawudun said she walked across the Kazakhstan border to her waiting husband.

How Chinese government tries to silence overseas Uyghurs 04:18But in the days that followed, Ziyawudun’s health deteriorated, and she suffered vaginal bleeding. In 2020, Ziyawudun was rushed to the US for medical treatment. Shortly after her arrival, doctors surgically removed her uterus, with medical records seen by CNN showing she was diagnosed for a pelvic abscess and vaginal bleeding, as well as tuberculosis. She said she blamed her medical complications on her treatment in the Xinjiang camps, although CNN cannot verify this conclusion.”(After she got out) she didn’t tell me anything about her experiences in the camp,” Halik says. “Sometimes she would cry at night and I was very angry. I knew that these things she experienced were not good, but I didn’t dare to ask.” 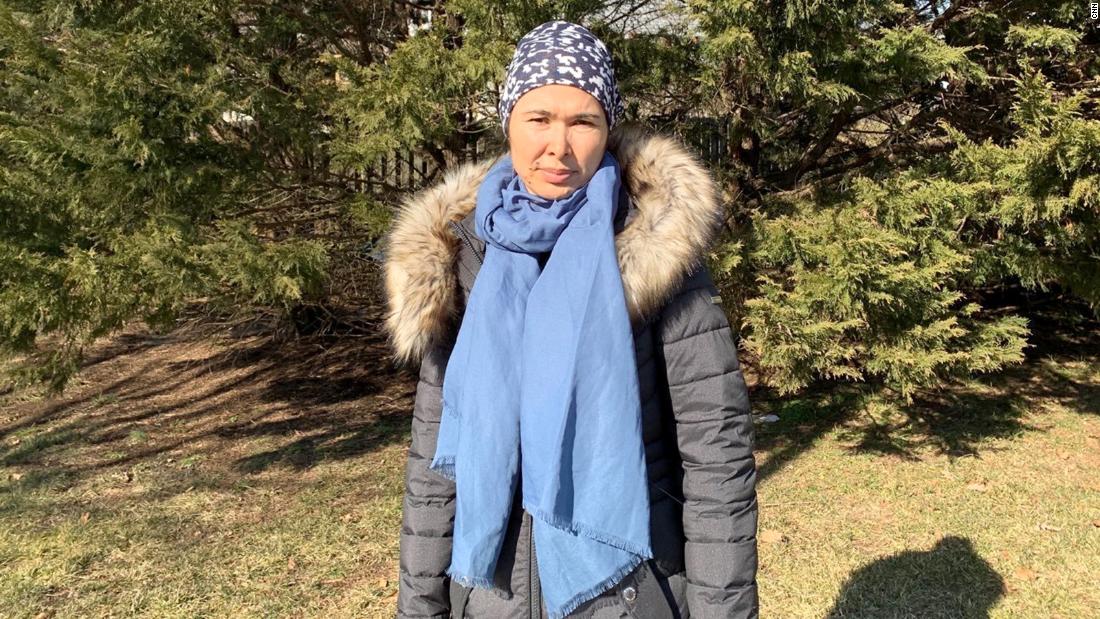 Tursunay Ziyawudun now lives in the US after being rushed there for medical treatment for problems she says are related to her detention.

In a statement to CNN, the Chinese Ministry of Foreign Affairs did not address the allegations made by the three women directly but instead issued a broad denial.” We hope that the relevant media can distinguish right from wrong, not be deceived and misled by false news and biased reports,” the Foreign Ministry said, adding that their training centres “protect the basic rights of trainees including women from being violated, and it is strictly forbidden to insult and abuse trainees in any way.” The Xinjiang Uyghur Autonomous Region administration has not responded to requests for comment.

Biden reveals conversation with Chinese president on human rights 03:01In a news conference on February 3, Chinese officials introduced some ethnic minority women who they said had “graduated” from the system, and “shared how they got rid of extreme thoughts.” They also said reports of mass rape and forced sterilization were “sheer nonsense” and state media has sought to personally discredit the women’s claims. For example, in an article published on February 10, the Global Times accused Gulbakhar Jalilova of being “an actor” and Tursunay Ziyawudun of lying about her forced sterilization, quoting a senior official saying that “all her family members know that she is inherently infertile.” Ziyawudun told CNN she had a forced IUD insertion, not sterilization. Ziyawudun said she had no reason to make up her allegations. “I am a woman in my forties. Do you think this is something I can be proud of sharing with the world?” she said.” I would tell them I am not afraid of them anymore, because they already killed my soul.” For her part, Sidik, the teacher, said she was told by her husband that government officials had come to his house and coached him for four hours about how to film a short video denying his wife’s claims of being in a detention centre. She said her husband told her to never come back to Xinjiang. “He blocked me again on Wechat, I don’t know, is he alive or dead now?” she said.