HS2: Could the pandemic kill off the rail project?

Leading environmental groups have joined the call from protesters tunnelling under London’s Euston station to review HS2 in the light of the pandemic.

The high-speed rail line was planned to accommodate increased passenger numbers over the coming decades, but experts forecast that the home-working revolution may permanently reduce UK travel demand.

Now, the government says the main justification is that HS2 is part of a long-term infrastructure plan serving future needs.

But the head of the Department for Transport has admitted it has no idea of future travel patterns nor passenger numbers.

Objectors to the project – a high-speed rail link between London, Birmingham, Manchester and Leeds – fear that emissions from construction work will outweigh any carbon savings for decades.

They are also angry about the damage to wildlife sites and ancient woodlands. One of the founders of the UK green movement, Tom Burke, has described the railway as a “20th Century project for the 21st Century”.

Parliament initially approved HS2 in 2016 but political opposition has not gone away and the environmental case for the railway is coming under greater scrutiny in Westminster.

Green Party MP Caroline Lucas says HS2 does not represent an investment in a greener future but is “a destructive vanity project and needs to be stopped before it does any more damage”.

Chesham and Amersham MP Dame Cheryl Gillan, one of HS2’s most vehement critics, questioned whether the cost could be justified when “you have not established that the future use of public transport will be at a level that will make this railway viable in any way, shape or form?”

In response, Ms Kelly said the business case had been closely examined before Boris Johnson finally gave the go-ahead a year ago.

“HS2 is not a project about the next five or 10 years,” she said. “It is a project that we expect to be still delivering for passengers in 100 years and 150 years. The conscious decision was taken to continue because it is a very long-term project and it is long-term investment in future infrastructure and future economic activity. That is the driving factor.” 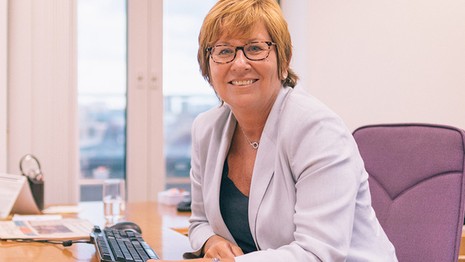 gov.ukWe do not actually know what demand will be like in six months or six yearsBernadette Kelly
Permanent Secretary at Department for Transport

Dame Cheryl asked if the forecast passenger numbers had been re-visited recently – a year into the pandemic.

“Much as I wish it were otherwise, we do not actually know what demand will be like in six months or six years,” said Ms Kelly.

A government spokesperson told BBC News that the business case for the railway encompassed high and low demand forecasts.

But at the time of writing, the government hadn’t confirmed that the low forecasts include the possibility of zero growth – a concept that would have been hard to imagine a year ago.

Labour’s Lord Adonis, who got the HS2 project under way while in government said:

“HS2 is emphatically green, unless you take the view that we shouldn’t have any additional transport infrastructure what so ever.

“All big infrastructure projects attract protestors because railways have to go somewhere. In the case of railways and HS2, there are fewer protestors than you would normally get with big infrastructure projects like Heathrow or bypasses, let alone nuclear installations. And that’s because the green movement itself is divided on railways, a lot of greens are pro rail.”

Lillian Greenwood, the Labour MP for Nottingham South and former chair of the Commons transport committee, says if the UK wants to avoid “a car-led recovery” from the pandemic, it needs to invest in alternatives.

“Once restrictions are lifted people will undoubtedly want to visit family and friends, travel to university, go on holiday and get back to the workplace,” she says.

Business groups in the north of England are also urging the government to press ahead.

“We have waited decades for this investment,” Tim Wood, director of Northern Powerhouse Rail, which plans rail expansion in the North in conjunction with HS2, told the BBC.

“Connectivity will mean big businesses from the South coming up to the North, creating far better job opportunities. The pandemic won’t be here for ever. We are very confident that passenger numbers will come back.”

But the pandemic has given fresh ammunition to long-term critics of the project, such as the Taxpayers Alliance, which says arguments about increasing rail capacity “don’t hold water” any more.Following the pandemic, this looks like a 20th Century project irrelevant to the 21st CenturyTom Burke
Founder of UK green movement and chairman of E3G

And the left-leaning IPPR think tank – previously a loud supporter of HS2 – believes the government should now pause and re-examine the economics.

Its spokesperson Luke Murphy says: “Given the significant public investment, it is right that the government should keep it under review, assessing how long-term trends might impact on the value of the project.”

Tom Burke, from the think tank E3G, confesses he has changed his mind on HS2.

“When HS2 was first proposed it was an era when investment in public transport of all kinds was in decline, so it seemed like a good idea. The economic justification has been destroyed by Covid.

“The savings in journey times which justified it won’t materialise in the post-Covid remote working economy. It’s not good for the climate and prevents much more beneficial investment in the cross-country rail network, especially north of Watford.”

What’s more, a February 2020 report from HS2 said the project wouldn’t reduce CO2 overall for more than 100 years, largely because of the emissions created during tunnelling and construction.

HS2 says that forecast is out of date – and points to measures it has taken to reduce construction emissions by using less steel to do the same job. But it hasn’t produced any new figures.

And doubts are creeping in, among a wide range of environmental groups, about the wisdom of proceeding.

“We are all for investment in public transport and especially in the North which has an overabundance of motorways and very little in terms of a modern, electrified train system,” says John Sauven from Greenpeace.

“But a very expensive train will do a lot of environmental damage with little benefit.”

And Craig Bennett, from The Wildlife Trusts, says the huge change wrought by the pandemic is an opportunity for ministers to “stop and rethink” the project.

“For the same amount of money that it is spending on HS2 it could ensure excellent broadband for all; massively improve local public transport and walking and cycling; improve existing railway lines; insulate millions of homes; and put proper investment into nature’s recovery.

“Surely that makes more sense given the world we find ourselves in now?”