How Amazonians saved a ‘Terminator’ of the fish world

(CNN)As fish go, the arapaima is pretty extraordinary. Found in the Amazon river basin, it is one of the largest freshwater fish in the world, capable of growing three meters long and weighing 200 kilograms (440 pounds).It breathes air, allowing it to live in water with little oxygen, and survive a day out of water altogether. It eats fish, but also birds, lizards and small mammals, crushing its prey with its tooth-covered tongue.This evolutionary masterpiece has an even greater trick — its scales, which researchers have compared to a bullet-proof vest, protect it from piranha attacks. Tough but flexible, their properties have even attracted the attention of the US Air Force.The arapaima is a Terminator of the animal kingdom, yet it has a fatal flaw: it’s good eating. Called pirarucu locally, it’s also known as “the cod of the Amazon,” by virtue of its firm white flesh and minimal bones. The fish is an important food source for local communities, but also prized among discerning diners in some of Brazil’s biggest cities. 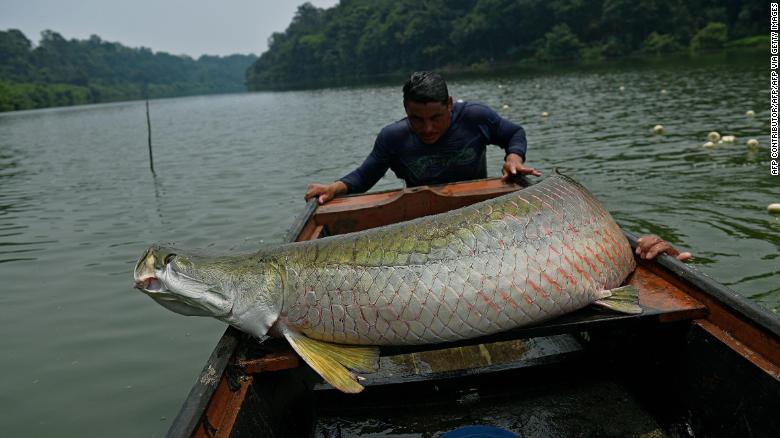 Fishermen load an arapaima onto their boat in the Western Amazon region near Volta do Bucho in the Ituxi Reserve on September 20, 2017.Overfishing led to population decline, and in the 1990s steps were taken to prohibit arapaima fishing. However, illegal fishing continued, causing the species to disappear from parts of the Amazon. But thanks to two decades of work from conservationists and local communities, that’s no longer the case.What’s more, the arapaima hasn’t disappeared from plates. In fact, consumption is crucial to the conservation model, meaning Brazilians can have their fish and eat it.

Today, fishing for arapaima is banned in Brazil unless within areas with community-based management agreements, explains João Campos-Silva, a Brazilian ecologist. Campos-Silva is part of Institutio Juruá, one of a number of organizations working with communities and fishers in grassroots programs to sustainably cultivate and ultimately revive the species.

Amazon tribes are using drones to track deforestation in the Brazilian rainforestArapaima spend the wet season navigating the flooded forest where they reproduce, returning to lakes when water levels drop. Focusing on the Juruá River and surrounding lakes in northern Brazil’s Amazonas state, a program implemented by Institutio Juruá over a decade ago introduced an annual population census and calculates sustainable harvest quotas for each lake for the following year (no more than 30% of adult fish, per government guidelines).Local communities guard lake entrances year-round to ward off illegal fishers coming from outside of the protected area. Harvesting is only allowed between August and November, and any fish smaller than 1.55 meters (5 feet 1 inch) long is returned to the water. 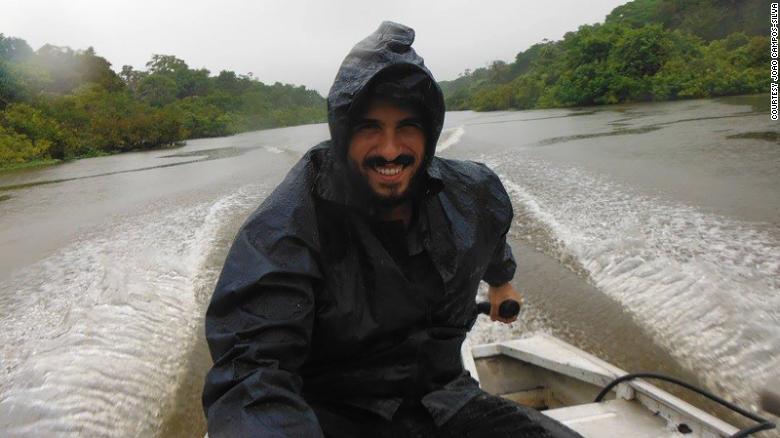 João Campos Silva on the rivers of Amazonas State, Brazil.Francisco das Chagas Melo de Araújo, also known as Seu Preto, is a community leader from Xibauazinho, a community in Amazonas state and one of the first places to begin the program. “Before the arapaima management … we had no rights to take care of these lakes. Commercial fishers conducted predatory fishing, where (they) used to harvest as much as they could,” he explains. “Our lakes were severely depleted and overfished and the arapaima was virtually non-existent.”Find out more about Call to Earth and the extraordinary people working for a more sustainable futureAfter 11 years of management, he says there are more than 4,000 arapaima in the community’s lakes.

This British farm went from a ‘biological desert’ to biodiversity hotspot by letting the animals take chargeCampos-Silva’s research on lakes around the Juruá River across the same period found the arapaima population more than quadrupled. As the population has grown, arapaima have migrated to new lakes, expanding their range. He estimates there are now roughly 330,000 arapaima living in 1,358 lakes in 35 managed areas, with over 400 communities involved in managing them.Income from community fishing is “generating clear social benefits,” he says, funding schools and infrastructure improvements, social security and healthcare, as well as boosting gender equality. 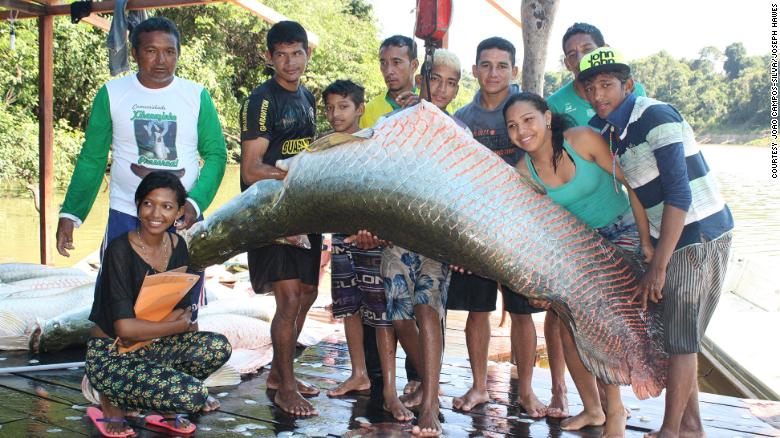 Francisco das Chagas Melo de Araújo, also known as Seu Preto (back left), a community leader from Amazonas state, alongside a sustainably caught arapaima.Raimunda Pires de Araújo, Seu Preto’s daughter, says she had no income before the management program. She’s now responsible for processing and cleaning fish, and is earning money. “This kind of opportunity increases our autonomy to fight for a better life,” she says.”Our job has been recognized nationally and internationally, increasing our pride and respect from other communities and organizations,” says her father. “Now we have the opportunity to help other communities to empower themselves.”

By learning to think like a puffin, this conservationist has saved seabirds around the world

His message to illegal fishers? “Get organized.” Seu Preto says they should join a legal fishing program and begin sustainable harvesting. “The greatest pride you can have is to (catch fish) and no one has the right to seize it.” Campos-Silva hopes the positive feedback loop created by the program will encourage more communities to get involved and ultimately help preserve more of the Amazon’s wildlife. “We are facing a global decline of large vertebrates,” he says. “Here we have a very positive case that clearly shows that we can pull it together, by diverse conservation and social needs.”