A full-scale humanitarian crisis is unfolding in Ethiopia, the UN says

(CNN)A full-scale humanitarian crisis is developing in the Horn of Africa as thousands of people flee ongoing violence in Ethiopia’s Tigray region, the United Nations Refugee Agency (UNHCR) said Tuesday. An average of 4,000 women, men and children have crossed the border into eastern Sudan every day since November 10, the agency said. In total, more than 27,000 people have now travelled into Sudan at three border locations, UNHCR spokesperson Babar Baloch said at a news conference in Geneva. “Refugees fleeing the fighting continue to arrive exhausted from the long trek to safety, with few belongings,” Baloch added. “UNHCR, with its partners, is supporting the Sudanese government in its response, ramping up humanitarian assistance at the borders as the needs continue to grow.”

Ethiopia says it has seized another Tigray town as conflict embroils Eritrea Ethiopian Prime Minister Abiy Ahmed launched a military offensive in the restive Tigray region on November 4 after accusing its ruling party, the Tigray People’s Liberation Front (TPLF), of attacking federal troops in the northern region, which borders Eritrea and Sudan. After announcing that it was “at war” with the TPLF, the federal army has since stepped up its military offensive, carrying out air strikes as part of Prime Minister and Nobel laureate Ahmed’s “law enforcement operation,” which has led to clashes across the area. A deadline for TPLF forces to lay down arms has expired, Abiy warned in a Facebook post published on Tuesday. He also promised to “reintegrate our fellow Ethiopians fleeing to neighbouring countries” in a tweet on Monday night. Across the border in Sudan, refugees from Tigray are arriving exhausted and with few belongings, said the UNHCR. In the border town of Hamdayet, clean water is available and latrines are being built but the agency says it is concerned about hygiene conditions as thousands more people continue to arrive on a daily basis. Other humanitarian organizations are also distributing relief items, including blankets and sleeping mats, according to the UNHCR. The World Food Programme is providing high-protein biscuits, while hot meals are being distributed by Muslim Aid. 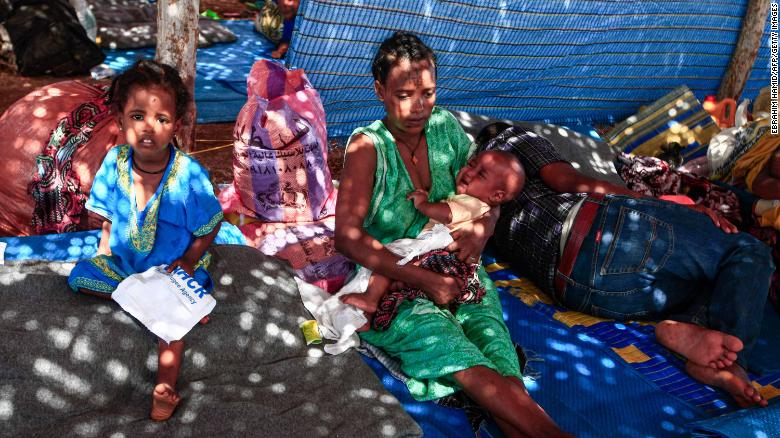 An Ethiopian refugee holds a child as she sits in a hut at the Um Rakuba camp in Sudan’s eastern Gedaref province on November 16.In Tigray, a lack of electricity, telecommunications and access to fuel and cash is hampering humanitarian efforts and making it difficult to verify information about attacks in the region. International diplomatic pressure to de-escalate tensions has fallen on deaf ears and other countries on the continent have begun to voice their concerns about stability in the region. Speaking at the State House in Nairobi on Monday, Kenyan President Uhuru Kenyatta urged the fighting parties to find a “peaceful means to end the crisis. “He warned against a full-blown conflict in Tigray, saying Kenya and Ethiopia have for long served as “anchor states for regional peace and stability,” according to a statement .Ugandan president Yoweri Museveni met Ethiopian deputy prime minister Demeke Mekonnen on Monday. In a tweet, he said the focus of their discussion was peace and security in Ethiopia. “Being one of the oldest countries that was not colonized in Africa, Ethiopia is the pride of the continent,” Museveni said.

Why is it so difficult to hold a census in North Macedonia?

These Iranian woman are crushing it in crypto

Which countries are on the green list for foreign holidays?

Why is it so difficult to hold a census in North Macedonia?

These Iranian woman are crushing it in crypto

Which countries are on the green list for foreign holidays?

Covid-19: Five ways to make hugging safer, from the experts